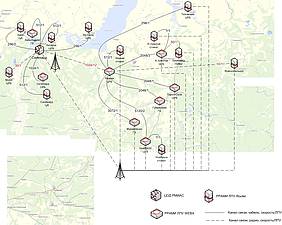 The Yamalo-Nenets Autonomous Region (YANAO) is located in the arctic zone of the West Siberian Plains, stretching out over a territory of about 750,000 square kilometers which covers 10.4% of the area of Russia. This area is known for containing the biggest gas reserves on earth and is home to around 546,000 people. The oil and gas industry is the most important economic sector and has led to the rapid growth of cities and communities in this formerly sparse part of Russia.

To improve the region’s medical infrastructure and healthcare services for the population, the local government’s IT and Communications Department was looking for a solution to create a distributed PACS to archive and share medical studies across YANAO. Some of the major requirements were to consider the narrow-band communication channels and their encryption as well as to provide access to medical images for every clinician.

The project included the integration of 16 hospitals and a total of 100 DICOM modalities into one regional PACS network. The channel bandwidths encountered ranged from 30 to 512 kb/s, or were non-existent at all in some remote clinics where internet connections can only be established via satellite links. This was especially challenging since the goal of the project was to ensure a data transfer every night from each site to the Central Archive located in YANAO’s capital city - the Arctic Circle town of Salekhard.

Delante installed two iQ-WEBX PACS at the Data Center and another 9 iQ-WEBX servers at the larger sites with lots of modalities. All of the 16 hospitals involved use IMAGE’s unique product iQ-ROUTER to achieve fast and secure data transmissions using very low bandwidth internet lines. As abnormal encoding of DICOM studies is a common issue due to missing support of cyrillic letters, an iQ-ROUTER PREMIUM was implemented at the Data Center to ensure data consistency in the central archive.

The installation will be complete by the end of April 2013, only 7 months after the project was assigned. Users are happy about the products and support received from IMAGE Information Systems thus far, since it gave them the opportunity to have a flexible, resource-saving solution. From now on, the Yamalo-Nenets Autonomous Region will be able to provide better service for referring physicians, thus reducing the wait time for patients.